I’ve talked previously about how online community engagement can help break down barriers to effective engagement. With the launch of our active travel map for Carmarthenshire, I thought I would take some time to discuss the language we use in community engagement and consultations. Does it suit the communities we are trying to engage with, and can they even understand it?

According to the ONS, “in the 2011 Census, 92.3% (49.8 million) aged three and over in England and Wales reported English as their main language (English or Welsh in Wales). The remaining 7.7% of the population (4.2 million) had a main language other than English.”

Which means on a macro level, it looks like we are safe using English as the primary method of communication.

However, when dealing with local communities, we often need to look at a more micro-scale. Those who are not fluent in English may be hesitant to participate in traditional consultation methods such as town hall meetings or surveys. This is especially relevant in communities with significant immigrant populations whose views may end up not being represented.

In the 2011 Census, The London borough of Newham had the lowest proportion of people reporting their main language as English at 58.6%. Other London boroughs, Brent (62.8%), Tower Hamlets (65.8%), Ealing (66.1%) and Westminster (69.2%), also had some of the lowest proportions where English was the main language. These areas were also shown to be some of the most ethnically diverse. 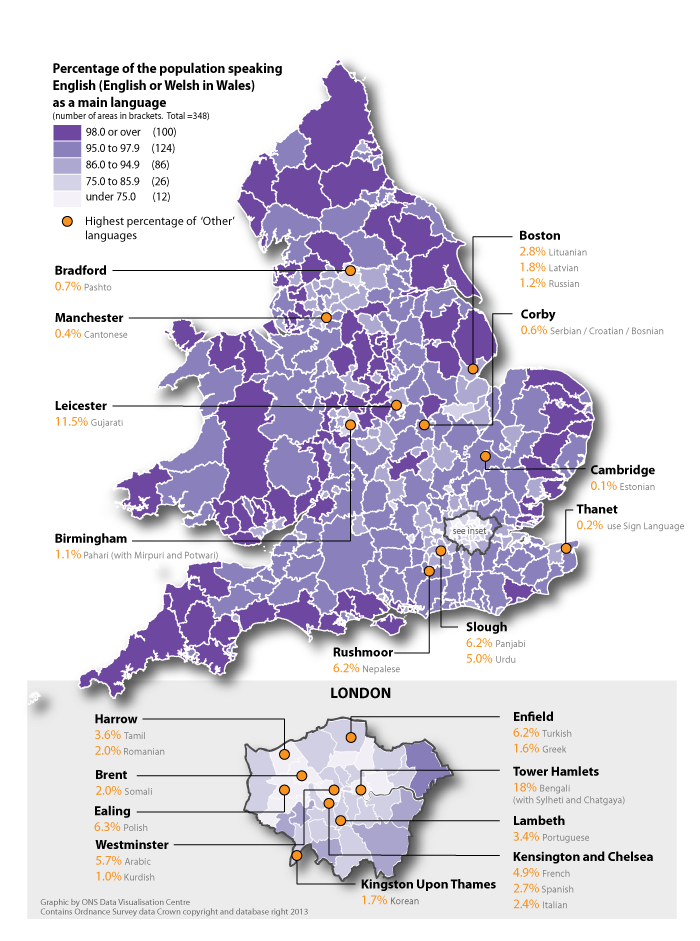 Low levels of literacy or language ability can be a critical factor that hinders community engagement.

16.4% of adults in England, or 7.1 million people, can be described as having ‘very poor literacy skills.’ They can understand short, straightforward texts on familiar topics accurately and independently, and obtain information from everyday sources, but reading information from unfamiliar sources, or on unusual issues, could cause problems. –National Literacy Trust

Public consultation topics often involve complex and lengthy discussions around policy issues, which may include technical documents that, let’s face it, are not often praised for their readability.

Simplifying the language, we use to avoid technical language or jargon where possible should be standard. However, we could also take that one step further and break down complex ideas with easy to understand infographics or images, with rich multimedia such as audio and video or even digital storytelling.

We took these principles on board when designing our engagement platforms, Explore and Engage. Both can present information in multiple languages. In a personal highlight for me, our Active Travel engagement for Carmarthenshire County Council has recently launched with the ability to choose between Welsh and English from the start.

Simplifying text and combining it with interactive maps and rich media makes complex issues easier to understand and allows users to progress at their own pace and, importantly, from anywhere or at any time.

As an example, when IM Properties, development partner for Birmingham City Council, wanted an innovative way to convey their transport strategy for the proposed Peddimore Logistics Park, they turned to our Explore platform.

Along with being armed at the events with iPads and large screen, the team published their proposals on their website, allowing it to be available outside the consultation events.

As a result, planning permission was granted for Peddimore in August 2019.

To see these tools, and others, in action check out demo.deetu.com/

I’ve talked previously about how online community engagement can help break down barriers to effective engagement. With the launch of…

I’ve talked previously about how online community engagement can help break down barriers to effective engagement. With the launch of…